“I was loathe to reveal the whole truth to this man, to this Fellow Countryman, or to other Fellow Countrymen, Kinsmen ... as I would haply be burnt alive at the stake, pulled apart by horses or tongs, deprived of good fame and credit.”

Witold Gombrowicz himself qualified Trans-Atlantyk as a “parody of an old-time tale, in an old-fashioned and stereotypical genre.”
Inspired by the classics of Polish literature, this satire of Polish emigrants in Buenos Aires is a pastiche of the 17th-century Polish Baroque style known as Sarmatism. 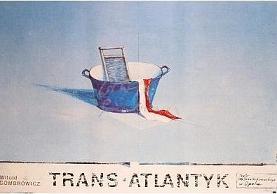 Begun in 1948 and finished in 1950, Trans-Atlantyk was written by Witold Gombrowicz entirely during his work hours at the Banco Polaco in Buenos Aires.

“Sail to that holy Nation of yours haply Cursed! Sail to that St. Monster Dark, dying for ages yet unable to die! Sail to your St. Freak, cursed by all Nature, ever being born and still Unborn! Sail, sail, so he will not suffer you to Live or Die but keep you for ever between Being and Non-being.”

In 1951, Jerzy Giedroyc, the director of the emigrant journal Kultura in Paris, publishes extracts of Trans-Atlantyk along with an introduction by Witold Gombrowicz. These extracts strike at the most sacred of nationalist sentiments of Polish emigrants, and subsequently provoke their indignation.

In spite of the scandal, Jerzy Giedroyc decides that Kultura’s Literary Institute will edit Trans-Atlantyk as a single volume along with Gombrowicz’s play The Marriage in 1953.
.

In Poland, the novel was officially published only in 1957.

In Poland, Trans-Atlantyk is published by Czytelnik in 1957 in Warsaw, thanks to a brief liberalization of the Communist regime. In his new preface, Witold Gombrowicz addresses his Polish readers in Poland. He also takes advantage of this new publication to make some modifications to the text, and suppresses a number of the text’s characteristic capitalizations of nouns, adjectives, and verbs.
The French translation by Konstanty “Kot” Jeleński and Geneviève Serreau, based on the 1957 Polish edition, is published by Maurice Nadeau in “Les Lettres nouvelles” in 1976. It is preceded by a long presentation of the text by Jeleński, who explains the difficulties posed by the translation of the text. Inspired by “gaweda,” the oral narrative of the Polish nobility, Witold Gombrowicz’s Baroque autobiography, rich in verbal inventions and linguistic turns, holds the reputation as his most-difficult-to-translate work.

Witold Gombrowicz’s charges against “Polishness” garnered him violent attacks by his compatriots at the time.
Today, the novel is considered a literary masterpiece and the very height of lucidity in patriotism.

“I feel a need to relate here for Family, kin and friends of mine the beginning of these my adventures, now ten years old, in the Argentinian capital. Not that I ask anyone to have these old Noodles of mine, this Turnip (haply even raw), for in the Pewter bowl Thin, Wretched they are […]”

Paradoxically, Trans-Atlantyk is the only novel of Gombrowicz’s in which the action takes place entirely in Argentina. 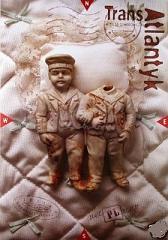