“They were strange, these prehistoric relics from an old, finished time at large in the new democracy that was becoming more all-embracing with every day.”

Polish Memories is an autobiographical narrative that ends in July 1939, when Witold Gombrowicz, then 33 years old, left for Argentina.
Gombrowicz writes of his family origins—Lithuanian on his father’s side and Polish on his mother’s, both belonging to the landed gentry—his childhood in the country manor at Małoszyce, his years of studies and maturation in Warsaw, and his literary beginnings. 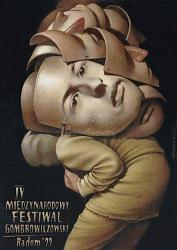 Wiesław Wałkuski’s poster for the Gombrowicz Festival in Radom, 1999.

Witold Gombrowicz composes his own portrait with lucidity and humor and brings to life the interwar period—the only twenty years of freedom that Poland experienced after 130 years of division, which were to be followed by World War II and the subsequent 45 years of Soviet domination. fifty of Nazi and Soviet domination.
Gombrowicz narrates the excitement sustained by national independence, the change in attitudes, the intense artistic creativity, and the life of the literary cafés.

“Talking nonsense was undeniably one of the occupations I found most absorbing in those times.”

Witold Gombrowicz also evokes his friendship with other writers, including Bruno Schulz and Stanislaw Ignacy Witkiewicz. He writes about Jews before the war and about certain remarkable women, including Zofia Nałkowska, who were his friends.
This long-disappeared society is revived in his words.