On the 25th of August 1939, the Chrobry leaves the port of Buenos Aires. Witold Gombrowicz learns of the endorsement of Hitler and Stalin’s pact and the imminence of war in Europe and decides to stay in Argentina, presenting himself to the Polish Legation.

“I left for Argentina accidentally, for only two weeks, if by some quirk of fate the war had not broken out during those two weeks, I would have returned to Poland—but I did not conceal that when the door was bolted and I was locked in Argentina, it was as if I had finally heard my own voice.”

Buenos Aires, postcard from the 1950s.

From September to December, Witold Gombrowicz lives at tiny pensions in Buenos Aires’s city center. Jeremi Stempowski introduces him to other Poles and well-known Argentinian authors Manuel Gálvez and Arturo Capdevila. Gombrowicz has only the 200 dollars brought with him from Poland to live on.

August 23 marks the signing of the Ribbentrop-Molotov Pact. Poland is crucified. Hitler’s army marches in Warsaw.

Poland falls on September 28th. A new frontier on the Bug-San line portions off the country to the occupying Soviet and Nazi forces. An immediate retaliation follows against the Polish and Jewish elites follows: they will be massacred and deported.

Witold Gombrowicz moves to Bacacay Street in the Flores district, far from the city center at the time.

Twenty-seven years later, Gombrowicz will use this street name as the new title for his collection of stories, previously titled Memoirs From a Time of Immaturity.

Gombrowicz begins visiting the Capedevila family. He organizes a cycle of lectures for their daughter Chinchina and her friends.

Arturo Capdevila and his daughter Chinchina.

Arturo Capdevila recommends Gombrowicz to the journal Aquí Está, for which he will write under a pseudonym. Manuel Gálvez recommends him to La Naciòn, Buenos Aires’s most prominent daily, where his articles are all rejected, as well as to the El Hogar, where he publishes one story under a pseudonym.

Antonio Berni between two of his paintings.

Witold Gombrowicz meets young Argentinian artists, for the most part Communist sympathizers: the writer Roger Pla; the painter Antonio Berni, at the home of which he will give a lecture; and Leonidas Barletta, director of the Teatro del Pubelo, where he give another talk on August 28, which will be considered a scandal among Poles in Argentina.
In July, Witold Gombrowicz’s cousin Gustaw Kotkowski arrives in Buenos Aires.

“When Gombrowicz began to know writers and intellectuals, he garnered two reactions: the ones who said he was a snob, extravagant, nothing more. The others, like Mastronardi, became interested in him in a much more serious way.”
—Roger Pla, Gombrowicz en Argentine (Gombrowicz in Argentina) by Rita Gombrowicz [Trans. Dubowski]

Witold now lives in utter destitution: The Furstembergs, who had ties to Gombrowicz’s family in Poland, organize a collection for him. At the end of the year, he moves again, to the conventillo "El Palomar".

Witold Gombrowicz allies himself with his friends Cecilia Benedit de Debenedetti, editor and patron of the arts, and Carlos Mastronardi, a writer and friend of Borges. Another source of support: Paulino Frydman, director of the chess club at Café Rex, which “Witoldo” (Gombrowicz’s nickname) will frequent almost daily for the next eighteen years.

Buenos Aires in the 1930s, drawings by A. Siegrist.

A popular district of Buenos Aires extended out from the train station: Tango, bars, prostitution.

Gombrowicz writes articles under pseudonyms in various journals with the help of Roger Pla, who corrects his texts in Spanish.
Witold Gombrowicz also frequents the area around Retiro Station, behind the port, where he has homosexual experiences.
.

In December, when young émigrés are being mobilized to join the army in England, Witold Gombrowicz presents himself once again to the Polish Legation of Buenos Aires—but he is judged unfit for military service.
“Morally, he suffered from his situation. At every one of our meetings we discussed the war. We understood that Poland had been liquidated, that it was all over. Where is our country? we would ask. Witold was in despair, but didn’t show it.”
—Jeremi Stempowski, Gombrowicz en Argentine (Gombrowicz in Argentina) by Rita Gombrowicz [Trans. Dubowski]
1942

Tacuari Street has radically changed since Witold Gombrowicz lived there.

Witold Gombrowicz lives at a pension at 242 Tacuari Street. He plays chess often, expands his circle of young Argentinian friends, and participates very little in Polish émigré life, leading a bohemian existence.
He survives thanks to the help of his young Polish and Argentinian friends, as well as a modest stipend from the Polish Legation. He suffers from insomnia and overall weakness.

The Andes around Mendoza. For Witold Gombrowicz, this mountainous countryside recalls the Polish Tatras and its famous vacation spot, Zakopane.

In December, Gombrowicz takes a trip to the mountains, to Mendoza.

“America! In Argentina, the giganticness of the continent, its power, manifested themselves to me on two occasions: on the Parana and Uruguay rivers, which never finished, that never narrowed, like the dinosaurs of prehistory, and while approaching the Cordillera in the Andes. Embedded in the car or while walking, I look and I think of memories from long ago.”
—Argentinian Peregrinations [Trans. Dubowski]

In Poland, Bruno Schulz is killed in the Drohobycz ghetto by a civil servant of the Gestapo.

Bruno Schulz (1892-1942).
"This little fellow [Schulz] was the most outstanding artist of all those I knew in Warsaw. […] The prose that came from his pen was imaginative and immaculate; amongst us he was the greatest European writer, with the right to take his place amongst the greatest intellectual and artistic aristocracy of Europe.”
—Polish Memories [Trans. Johnston]

Stanisław Odyniec, an émigré friend, secures Gombrowicz a post at Solidaridad, a journal headed by Jesuits. He works with the catalogs and archives. Witold Gombrowicz also collaborates on the Catholic journal Criterio under the pseudonym Lenogiry, the name of one of the Lithuanian estates that once belonged to the Gombrowicz family.

la revue "Criterio" 1944. Witold Gombrowicz.
After having left his pension on Tacuari Street, without paying, Witold Gombrowicz is invited by the Polish journalist M. Taworski to his villa in Morón, in the suburbs. He will sleep on the floor there for six months. At the end of the year, Gombrowicz falls ill.

A growing metropolis: Buenos Aires in the late 1940s.

“One night, he came to my house, pale, greenish, thin, coughing; he let himself fall heavily into a chair. ‘Give me something to eat,’ he asked me, ‘I haven’t swallowed a thing for two days.’ I quickly made him a piece of meat. In my emotion, I had forgotten to salt it, but he didn’t notice until the very last mouthfuls. He confessed to me that he had come from Morón by tram (Morón is at least 30 kilometers from the city), because he didn’t have enough money for the train.”
— Halina Nowińska, Gombrowicz en Argentine (Gombrowicz in Argentina) by Rita Gombrowicz [Trans. Dubowski]

In Europe, the Germans announce the discovery of a mass grave in Katyń, near Smolensk, containing the bodies of more than 20,000 Polish officers assassinated under Stalin’s orders in 1940.

The mass grave in Katyń. For half a century, the USSR will deny this crime.

In Warsaw, the Jews of the largest ghetto in Europe created by the Nazis rise up on April 19, 1943.

From left to right: The trains of the Wehrmacht: “To Poland, to destroy the Jews.” In Warsaw: “Jews! This side of the street is forbidden to you.” 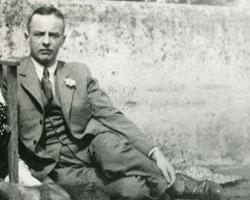 Witold Gombrowicz in the 1940s.

Gombrowicz and Borges.
The poet Carlo Mastronardi introduces Gombrowicz to Victoria and Silvina Ocampo and the group of writers associated with the journal Sur.

Witold Gombrowicz meets Jorge Luis Borges, but the two men do not get on well at all. The scene of their meeting is described in Gombrowicz’s Trans-Atlantyk.
Gombrowicz feels alien in the company of this Argentinian Parnassus for whom Borges serves as mentor.

Witold Gombrowicz continues his work on Solidaridad and publishes articles in Spanish under his own name in Oceano and La Nación with the recommendation of Eduardo Mallea.

The writer Eduardo Mallea (1903-1982) was the longtime director of the literary supplement of the influential daily La Naciòn.

“Numerous are those who sometimes ask themselves, with sincere astonishment: Why has literature become so boring? And: Why, in a general sense, does what is written leave me cold and completely uninterested? These are two healthy questions worthy of consideration.”
—“Art and Ennui”, an article by Gombrowicz published in La Nación, June 11, 1944 [Trans. Dubowski]

Gombrowicz’s story Philidor’s Child Within, published in Papeles in Buenos Aires, attracts the attention of Ernesto Sábato. This marks the beginning of a long friendship between the two writers.

In Poland, the Soviets install a provisional pro-Communist government in Lublin.

August 2 marks the outbreak of the Warsaw Uprising, which lasts two months and takes more than 220,000 victims, leaving the city ravaged.

Captured in these events, Janusz, Witold’s older brother, along with Janusz’s son Joseph, are deported to Auschwitz, then to Mauthausen. Irena and their mother take refuge in Kielce.

In February, Witold Gombrowicz rents a room at 615 Venezuela Street, where he will live until the end of his time in Argentina. Once again, he receives subsidies from the Polish Legation.

In November, Cecilia Benedit de Debenedetti agrees to finance the translation of Ferdydurke into Spanish.

At a reception at the end of the 1940s: Witold with his friend and patron Cecilia.

On May 8, the war in Europe ends. As a result of the Yalta Conference, Poland is now in the zone of Soviet influence.

After the Second World War, Poland’s borders were shifted west; its Eastern territories were annexed by the USSR.

“Witoldo,” in the hat, with his group of friends who translated Ferdydurke. From the left: Coldaroli, Peyrou, Piñera, Graziella Peyrou, Rodriguez Tomeu and de Obieta.

1946 is dominated by work on the Spanish translation of Ferdydurke. Work sessions with a group of friends are organized at Café Rex almost daily.

Humberto and Virgilio, the two Cubans, pillars of the Spanish translation of Ferdydurke.

The direction of the operations at Rex falls to “the Cubans”: Humberto Rodriguez Tomeu, who arrives in Buenos Aires in February, and Virgilio Piñera, who arrives in May. Cecilia Benedit de Debenedetti finances this translation.

In April, Witold Gombrowicz meets Alejandro Rússovich, who will become one of his closest friends in Argentina.

In August, Gombrowicz begins to write The Marriage.
Gombrowicz seeks to renew contacts with Poland, sending letters to his family and friends from before the war. He asks if a return home seems feasible.
In November, Editions Argos of Buenos Aires signs a contract for the publication of the Spanish translation of Ferdydurke.

Virgilio Piñera (1912-1979) wrote a novel and some of his stories in Buenos Aires. A Gombrowiczian inspiration can be detected in his work. A victim of Castro’s persecution, Piñera would die in extreme poverty in Cuba.
“He must have been searching for a solution to a difficult chess problem, or lost in ‘deep thoughts.’ I found myself faced with a man who had already passed his fortieth birthday, but whose baby features, and, more than his face, the state of his spirit, gave him the air of a twenty-year-old. Once the presentations were over, he said to Obieta: ‘How’s it going, Adolfo? And “el hijo de la pampa?”’ [Speaking about the Argentinian painter Luis Centurion.] Then he turned to me—holding his cigarette in that particular way, like a pipe-smoker, and his way of breathing, I realize he was asthmatic—and he said to me: ‘So, you come from far-off Cuba. Everything’s more tropical there, no? Caramba, the palm trees!’
This dialogue was the simple meeting of two dogs sniffing each other’s asses to get to know each other. And so we sealed an eternal friendship, after recognizing each other as persevering in the face of maturity and cultural immaturity.”
—Virgilio Piñera, Gombrowicz en Argentine (Gombrowicz in Argentina) by Rita Gombrowicz [Trans. Dubowski]
Writer and worker (1947-1955)