1964
After arriving in France, Witold Gombrowicz spends several days with Kultura in Maisons-Laffitte, just outside of Paris.
Next, accompanied by his nephew Józef, he leaves for Royat, in Auvergne, with the intention of taking a course of treatment at a spa. He lives at the Hotel Terminus in Clermont-Ferrand, searching for a room in Royat—but, after no luck on this front, he returns to Paris.

The Royaumont Abbey on postcards sent by Witold Gombrowicz to friends in Buenos Aires.

At the end of May, following the advice of Konstanty “Kot” Jeleński and Maurice Nadeau, Witold Gombrowicz leaves for the Abbey of Royaumont, a cultural center near Paris, where he will spend the next three months.

In Royaumont, Witold Gombrowicz suffers from his asthma and from nervous depression, but still participates in colloquia, notably on the subjects of psycho-sociology and Nietzsche. He provokes heated debates with other residents of the abbey.

Witold Gombrowicz reads voraciously—among other works, the Memoirs of the Duc de Saint-Simon—and lectures on Sartre’sBeing and Nothingness to young ladies in the park.

In September, Witold Gombrowicz leaves with Rita Labrosse for the Côte d’Azur, where he will live until his death.

The pair settles temporarily in Cabris, near Grasse, in the cultural center that was André Gide’s pre-war residence.

On October 25, they move into the Villa Alexandrine at 36 Place du Grand-Jardin, Vence, where they will stay until March 28, 1969. 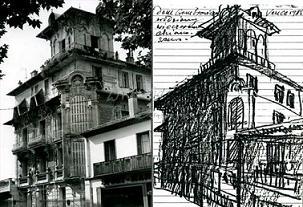 The Villa Alexandrine. Photo by Christian Leprince and drawing by Kazimierz Głaz.

Witold Gombrowicz has in his possession four books: an Argentinian philosophy manual, Lecciones preliminares de filosofia, by Manuel García Morente; a Spanish edition of Heidegger’s Being and Time; and Sartre’s Being and Nothingness and Saint Genêt.

Witold Gombrowicz hangs paintings on the wall, dresses in the “Old English” style.

The appartement in the villa Alexandrine. Photos : Bohdan Paczowski.

He completes his Paris-Berlin Diary, begun at Royaumont, as well as Cosmos, which he sends to Jerzy Giedroyc at Kultura. 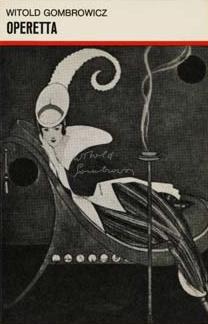 Witold Gombrowicz begins work again on Operetta. This time, it will become a finished version, published in Polish in 1966.
From September on, Witold suffers from a stomach ulcer. He consults Dr. Yvan Marniov, who will serve as his physician until his death.

1965
First visit to Vence of Maria and Bohdan Paczowski, who will become Witold Gombrowicz’s great friends.

At left, Witold between Maria and Bohdan Paczowski. Drawing on the wall by Teresa Stankiewicz. At right: Witold Gombrowicz, Paria Paczowska, the writer Sławomir Mrożek (standing), and the painter Jan Lenica. Photos by Bohdan Paczowski.

In March, Witold Gombrowicz recovers from his stomach ulcer. His overall health improves considerably. A woman brings him a little dog, which he keeps and names “Psina” (“poor little dog” in Polish). 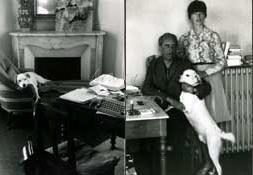 Psina at the Gombrowicz residence. At left, Bohdan Paczowski. At right, Jean Kalman.
“A nice walk with my Psina. In the café on the square, painters (Vence is full of them). Beer, whiskey . . . They say, ‘Oh, that one is now his girlfriend…’ Chagall, Dubuffet, and Papzoff. Mistral. My table has one leg that is too short. I have to buy matches. A hat.”
—Diary, 1966 [Trans. Vallee]

Witold and Rita spend the month of June in Chiavari, Italy with the Paczowskis.

In September, the couple buys a Citroën 2CV. This marks the beginning of their adventures in the region. Witold Gombrowicz writes, in a letter to his Argentinian friend Mariano Betelú: “There is nothing to say, it is the throne of the world." 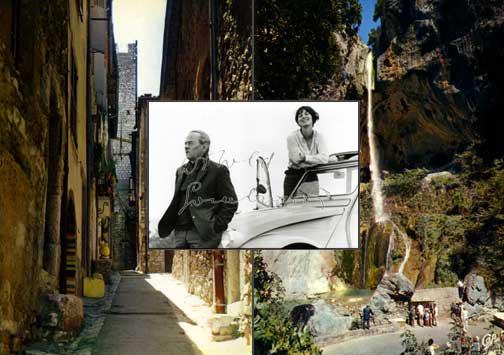 “The most beautiful trips are little excursions around Vence, just like Pickwick in the suburbs of London.”
Journal, 1968—Diary, 1968 [Trans. Vallee]

With Rita, he re-reads Dostoyevsky, Thomas Mass, Dickens’ Pickwick Papers, Conan Doyle’s Hound of the Baskervilles, and Agatha Christie’s Murder of Roger Ackroyd. “He drew me the plan of the apartment crime scene from memory,” remembers Rita Gombrowicz.

Witold Gombrowicz works on the final version of Operetta.

Witold Gomnrowicz at the Café La Regence in Vence with François Bondy and Rita Labrosse in March 1965. Photo by Lillianne Bondy.

In October, Jorge Lavelli mounts his production of Ivona, Princess of Burgundia at the Théâtre de France in Paris. In December, the play is directed by Alf Sjöberg at the Royal Dramatic Theater, Stockholm.

From 1965 on, Witold Gombrowicz’s work will see an international career: Translations appear in French, Portuguese, Spanish, Italian, and English..

In September, Witold Gombrowicz completes Operetta and sends it to Jerzy Giedroyc, who is at this time in the process of publishing his Diary 1957-1961 as a book.
The translators of Ivona, Konstanty “Kot” Jeleński and Geneviève Serreau, prepare the French version of Operetta, which Gombrowicz himself will revise. Witold Gombrowicz also continues to work on his Diary for Kultura.

Gombrowicz and Miłosz in Vence. Photo at center: Józef Jarema making faces. At right: Gombrowicz at left, Jarema with the pipe, Miłosz in the middle and, at right, English translator Alastair Hamilton.

The writer Czesław Miłosz, the future Nobel-prize winner, spends a month in Vence. A great friendship is born between the two Polish writers in exile. 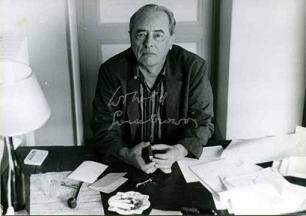 Witold Gombrowicz at his desk. Photo by Bohdan Paczowski.

Witold Gombrowicz bought this decorative clock with money from the Formentor Prize. At center, Witold photographed by Hanne Garthe.

On May 8, Witold Gombrowicz is officially notified that he has become a laureate of the International Editors’ Formentor Prize. The Prize’s former winners include: Samuel Beckett and Jorge Luis Borges (1961), Uwe Johnson (1962), Carlo Gadda (1963), Nathalie Sarraute (1964), and Saul Bellow (1965).

A week later, Maurice Nadeau’s Quinzaine Littéraire publishes the self-interview “I Was a Structuralist Before Anyone Else,” which Gombrowicz created especially for the journal.

Today, the text can be found in the Varia.

In June, Dominique de Roux begins work on the Interviews (which, after his death, will be re-titled A Kind of Testament), which he is creating at the request of the editors Pierre Belfond and Christian Bourgois. Dominique de Roux visits Vence regularly. Witold Gombrowicz begins editing his work in Polish. 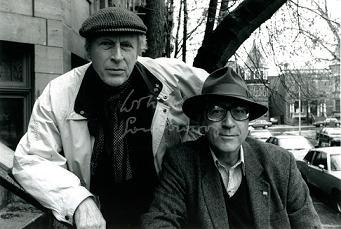 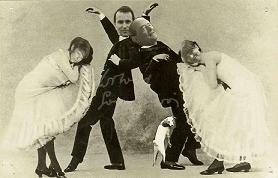 Photomontage by Maria Paczowska in celebration of Operetta: At left, Maria and Bohdan Paczowski; at right, Rita and Witold Gombrowicz, with Psina at their feet.

The diffusion of Gombrowicz’s work continues: Kultura publishes the Polish original version of Operetta. Bacacay is translated into French, Ferdydurke into Danish, Pornografia into Swedish and Japanese, and Cosmos into Norwegian and Japanese.

1968
In January, Witold’s older brother Janusz Gombrowicz dies in Warsaw.
Gombrowicz’s Diary reveals the true-false anguish of having a biological son in Argentina.
Witold writes to Ingmar Bergman of his desire to see a film adaptation of Pornografia.
He has borscht (barszcz), a traditional Polish soup, sent to him from Poland. 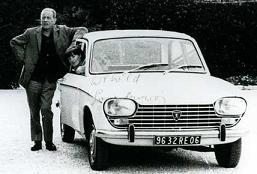 With the new “Peugeotte”, a nickname for Witold’s Peugeot 204, October 1968. Photo by Bohdan Paczowski.

In April, the Interviews are finished. Witold Gombrowicz revises them, and announces to Dominique de Roux: “If I win the Nobel, I’m going to buy myself a Mercedes-Benz convertible!” In the end, Kawabata wins, over Beckett and Gombrowicz. 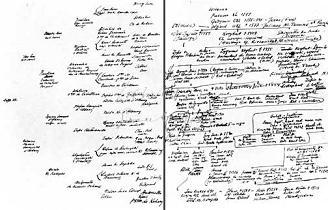 During his last vacation, Witold Gombrowicz studies geography and genealogy.
He becomes close with the painter Jean Dubuffet, who also lives in Vence. They take up a correspondence. 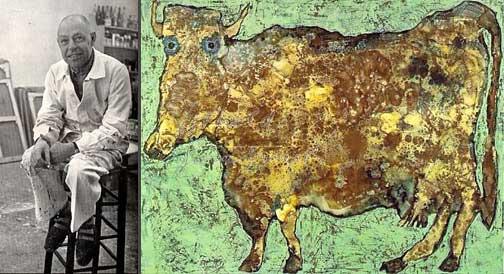 Jean Dubuffet and his “Cow with the Subtile Nose.”

In autumn, Witold Gombrowicz begins work on the Cahier de l’Herne that Dominique de Roux wants to dedicate to him. On November 18, Gombrowicz suffers a heart attack.

Rita and Witold Gombrowicz. Photo by B. Paczowski. “Les amants terribles” (a play on words of the French expression “enfant terrible”, which Cocteau used as a title for one of his novels and film), photomontage by Rita on the artist’s card of Kazimierz Głaz.

After four years of living together, Witold Gombrowicz marries Rita Labrosse at their home in Vence on December 28. She will speak of “paternal love” and of the “Eden of an endless childhood.”
An extract published in French in his Diary, “On Dante,” provokes the ire of Italian poet Giuseppe Ungaretti:

1969
In February, Witold Gombrowicz sends his Diary and Cosmos to General de Gaulle through Dominique de Roux as intermediary.

Witold Gombrowicz thoroughly enjoyed signing his works. Dedications to Paul Beers, his Dutch translator, and to James Ritchie in the Japanese edition of Pornografia.

At the end of March, Witold and Rita Gombrowicz move to Val-Clair, on the road from Vence to Saint-Paul-de-Vence. 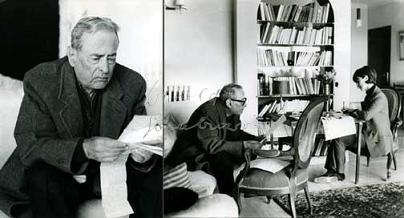 Solicited by Dominique de Roux, who wishes to help him out of his depressed state caused by his worsening health, Witold Gombrowicz gives philosophy lectures for Dominique and Rita, which will be published after the writer’s death as Guide to Philosophy in Six Hours and Fifteen Minutes.

In May, Michel Polac realizes his television program Bibliothèque de Poche (“Pocket Library”) with Dominique de Roux and Michel Vianey in Vence.
Watch this program (in French) on the website of the French National Audiovisual Institute 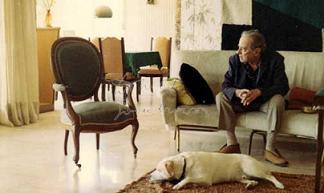 Witold Gombrowicz continues to work on the Cahier de l’Herne that is to be dedicated to him.
He receives a visit by Jacques Rosner, who will direct Operetta at the National Popular Theater at the Palais de Chaillot in January 1970. Gombrowicz will never see the production. 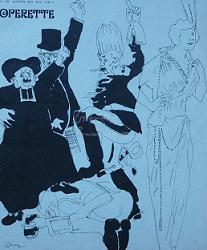 Operetta in Paris. Staging by Jacques Rosner, music by Karel Trow, and sets by Max Schoendorff, the author of this drawing.

Witold Gombrowicz continues to write his Diary for Kultura. The last paragraph is consecrated to the protests of Polish writers to the invasion of Czechoslovakia: “Has Poland not for years now been an occupied country, exactly like Czechoslovakia today? […] Shattered by the fate of Czechoslovakia, they forgot to consider their own destiny.” 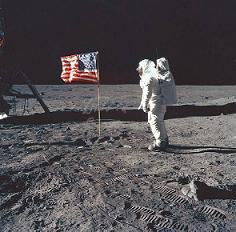 Neil Armstrong on the moon.

During the night of July 21-22, Gombrowicz watches the arrival of Neil Armstrong on the moon live on television. He is fascinated.
He dies July 24 of respiratory failure. 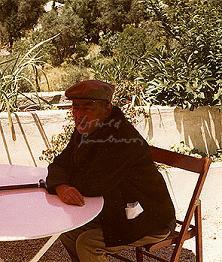 The last photo of Witold Gombrowicz, by Bohdan Paczowski.

Final interview, final questions: “What are your plans for the future? — The tomb.” His is in the cemetery in Vence.
Final project: A text for “two characters, a man, and a suffering fly,” inspired by Beethoven’s quartets, which Witold appreciated very much.

IMG/mp3/Beethoven_-_String_Quartet_Op._130_in_B-flat_major_-_Adagio_ma_non_troppo.mp3
The opening of Ludwig van Beethoven’s String Quartet No. 13 op. 130, played by the Busch Quartet. 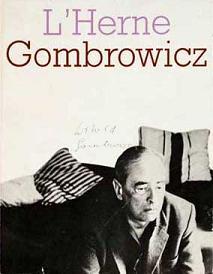 The Cahier de l’Herne “Gombrowicz” was published in 1971, after Witold’s death.

In the Cahier de l’Herne, in response to Dominique de Roux: “I think the Gombrowicz-Goethe theme is well-chosen, for it brings together two geniuses—one oriented toward the high, the other toward the low.”